Last month, I launched a public HackerOne security vulnerability disclosure program for my website. I've been working on this for a while, and I'm now very happy to have launched the program publicly!

If you're a hacker and you'd like to have a go, the program is accessible on HackerOne here: https://hackerone.com/jamieweb 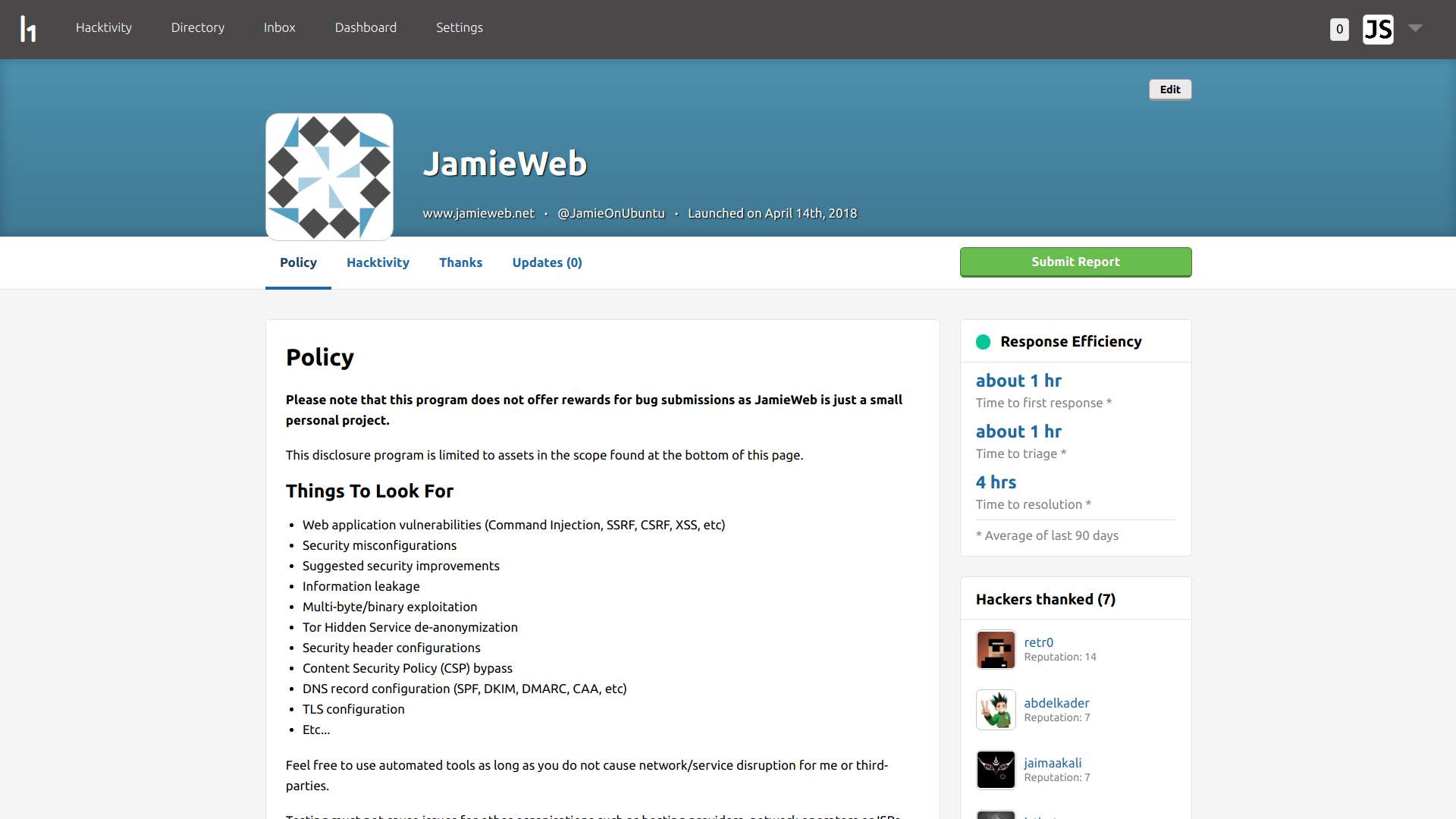 The front page of my HackerOne program at https://hackerone.com/jamieweb.

HackerOne is a security vulnerability coordination and bug bounty platform, with the aim of connecting ethical hackers with businesses for hacker-powered security testing.

The company was founded in 2012, and has since grown to have offices in San Francisco, New York City, London and Groningen (Netherlands).

I am using the HackerOne 'Response' service to host my vulnerability disclosure program. This service allows you to set up a security page on HackerOne for your organisation/project, which contains your security policy, disclosure guidelines and a list of assets that are in-scope of the program. The page essentially tells hackers what they do/don't have permission to test.

Security reports can be submitted to your program via your security page. These may come from users of your organisation's service/product who have come across a vulnerability, or from hackers on the HackerOne platform who have been proactively testing your systems. Once a report is submitted, the program's team members are alerted, and the report is handled within the HackerOne platform in a similar way to a customer service ticket.

Setting up the Program

The first stage of launching a HackerOne program is to define your vulnerability disclosure policy and scope. This outlines the guidelines for hackers to follow when participating in your program, as well as the assets that are in-scope of the program.

Your security policy should be short and concise, and usually includes details on things for hackers to look for, guidelines for security reports and activities that are not permitted as part of your program. 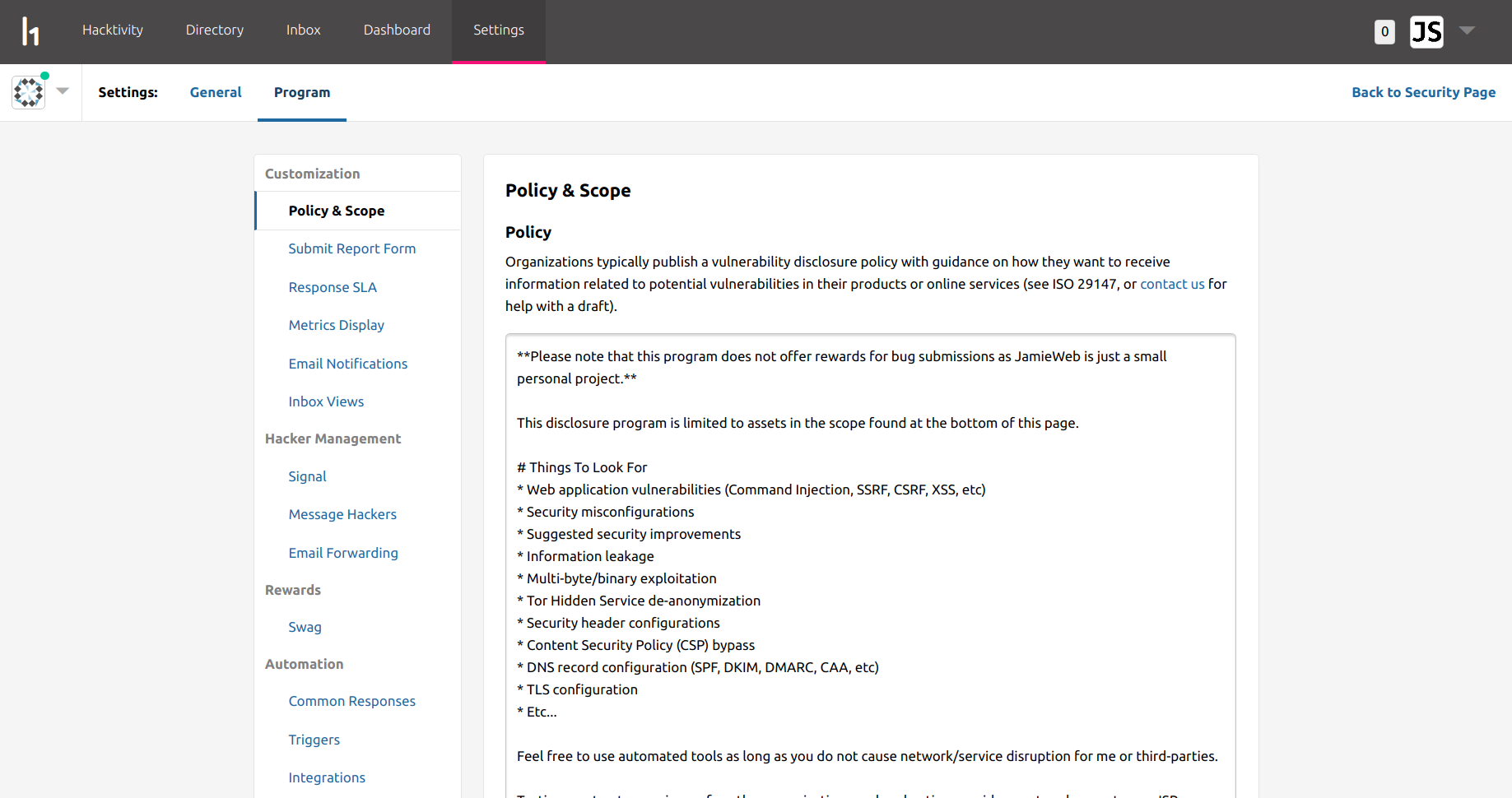 In my policy, I decided to allow hackers to test most things, however there are exclusions for things that I do not have full control over or could cause major damage, such as DoS (denial of service), phishing, etc.

You can add assets of different types, including domain names, IP addresses, mobile apps and even direct links to source code. The maximum impact to confidentiality, integrity and availability can be specified, as well as additional notes to guide hackers. 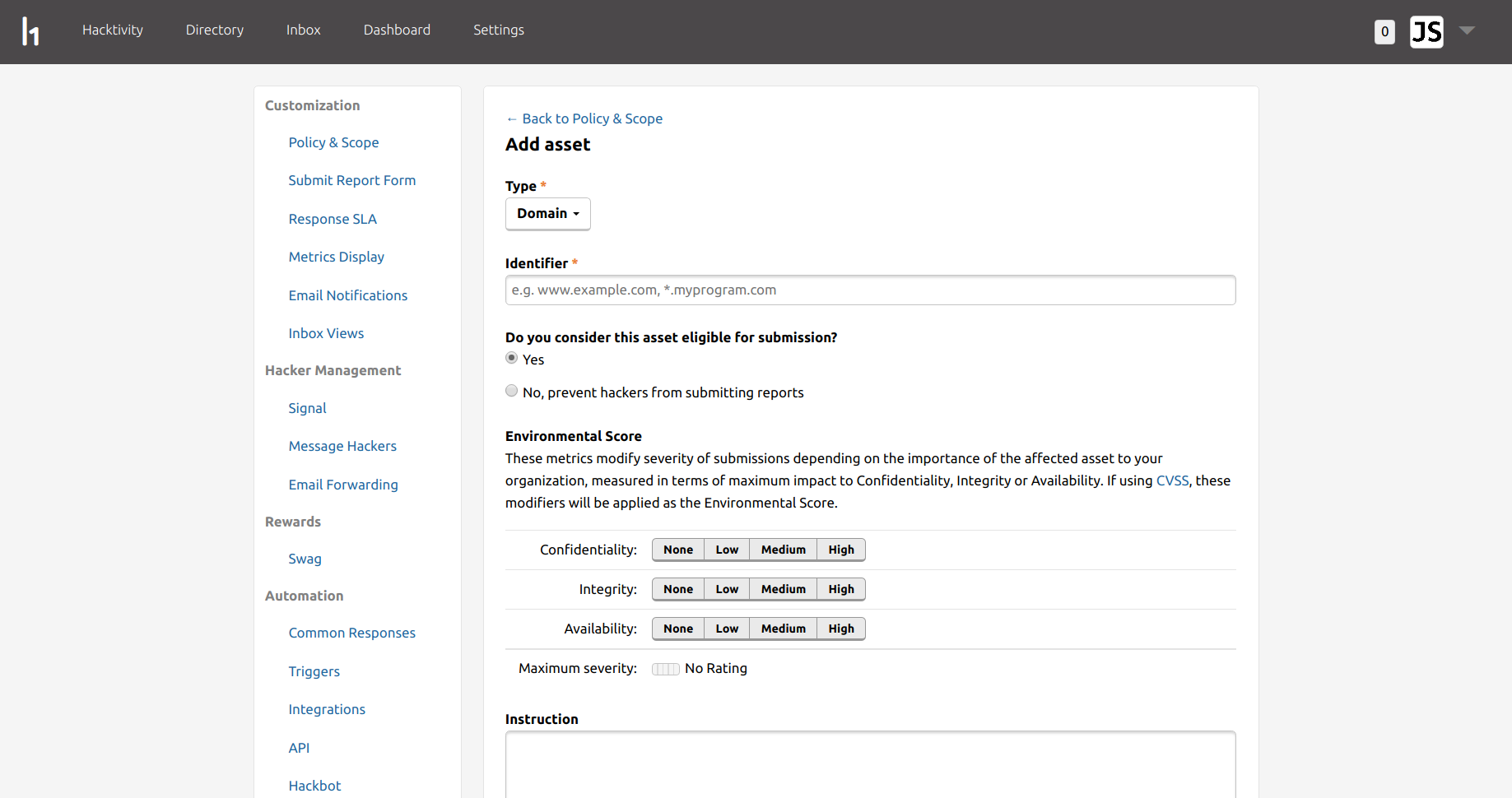 In my case, I added my main (sub)domain names, IP addresses, Tor Hidden Services and some of my source code hosted on GitHub:

HackerOne programs are bound by a response SLA (service level agreement), which you can customize yourself. This feature is more useful if you are operating your program as a team, in order to ensure that your members are responding to reports within an appropriate time frame. I'm operating my program myself though, and there is nobody else involved, so I've left these as the default. 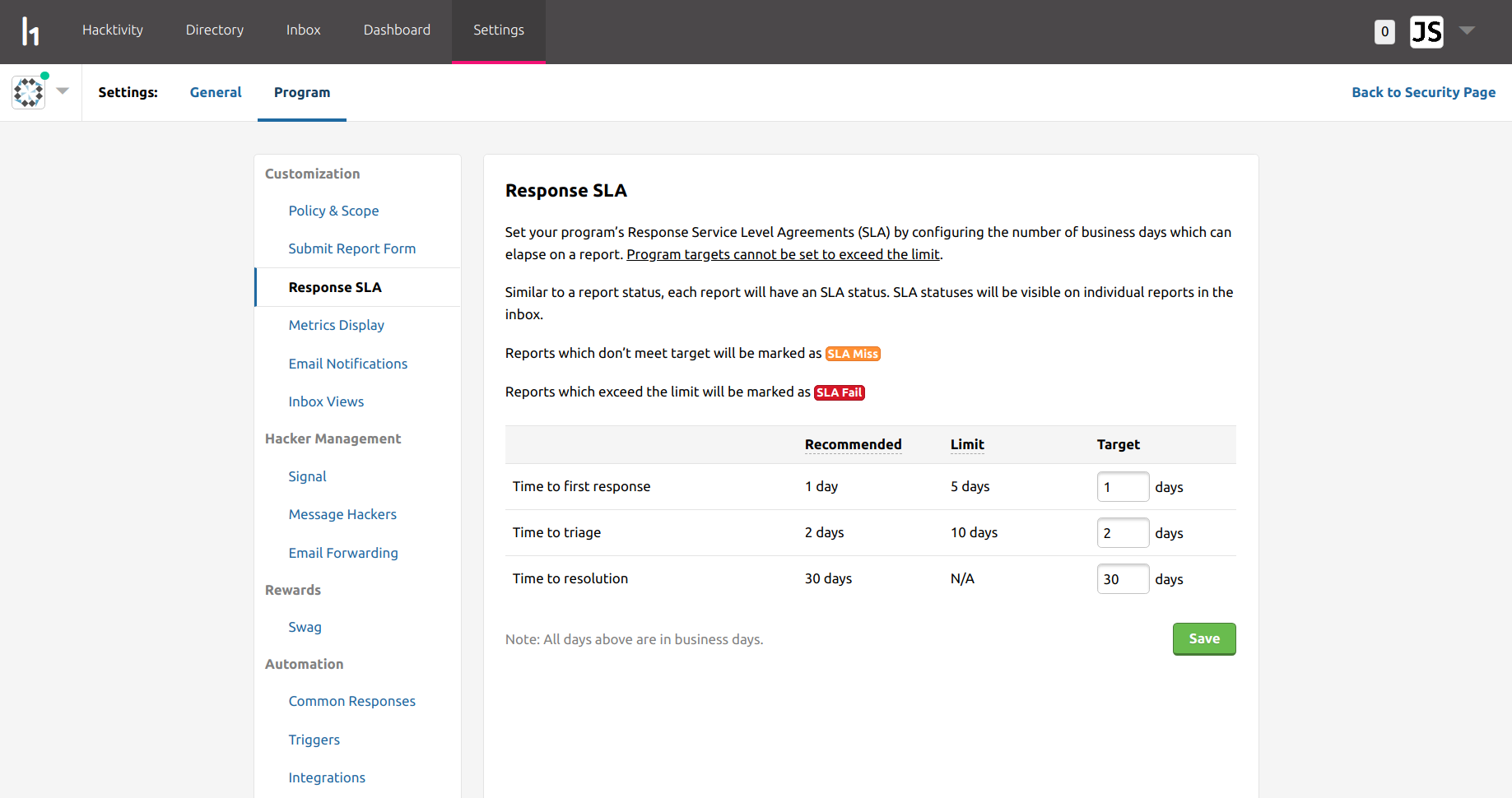 Once you have finalised your policy and scope, you must submit your program for approval. HackerOne will ensure that your policy includes all of the information it requires, and that the assets in scope are suitable for the program.

One thing to check before submitting is that your HackerOne account has a verified email address on the domain of the website for your program (in my case, an @jamieweb.net email address). This is to help prove that you are authorized to launch a HackerOne program for your organisation.

Once your HackerOne program has been approved, it will enter 'Controlled Launch'. This means that your program is not yet accessible to the general public and is hidden from the HackerOne website. However, some hackers from the HackerOne platform are automatically invited to the program in order to test it out. 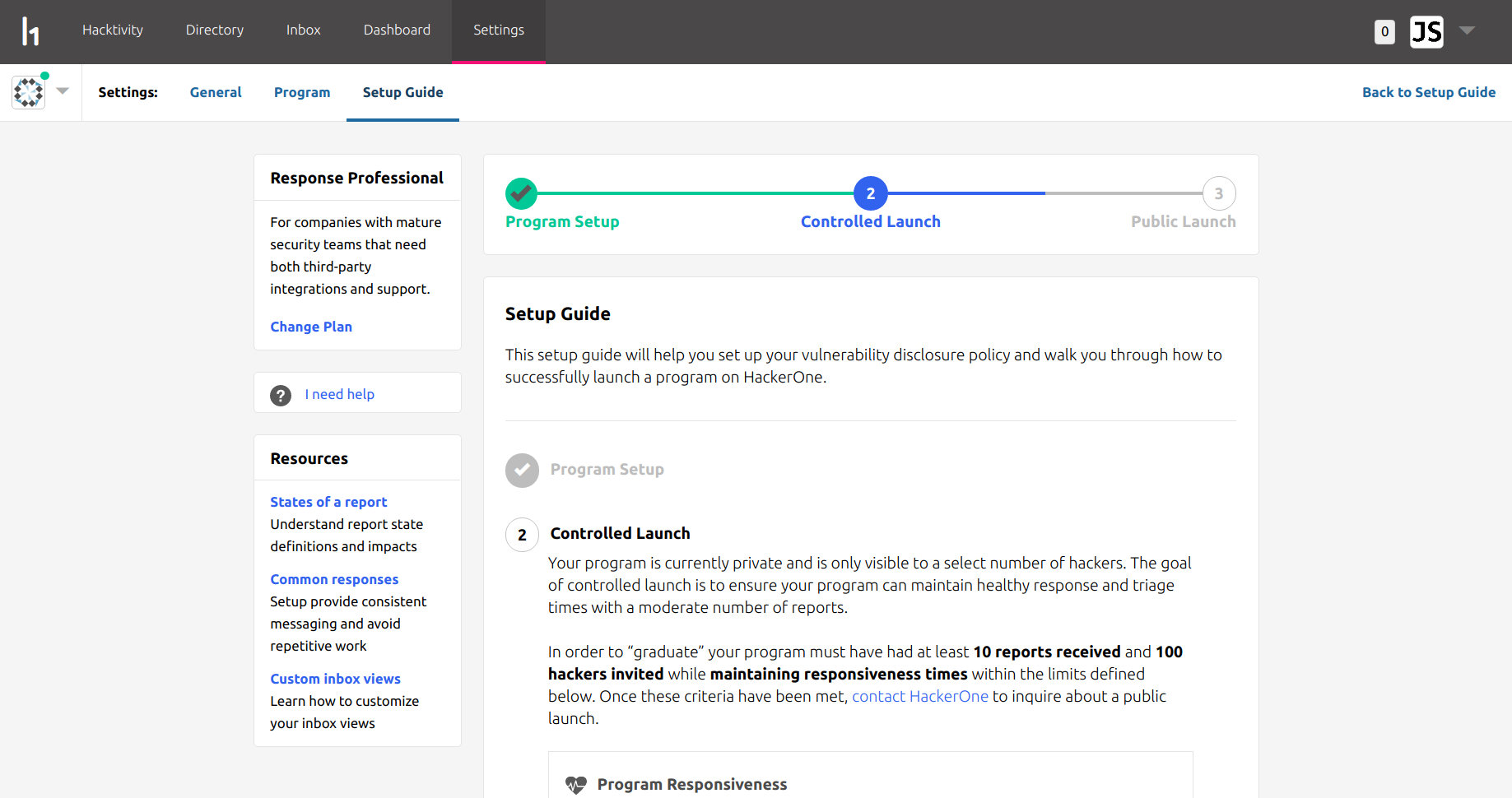 When my program first entered controlled launch, around 30 invites were sent out per day, which eventually built up to around 1,100 invites sent. Towards the end of the controlled launch phase, I requested for my daily invites to be increased, which took me up to 1,670 invites sent before the program launched publicly. Out of these 1,670 invites, 358 hackers accepted, which is a 21.4% acceptance rate. 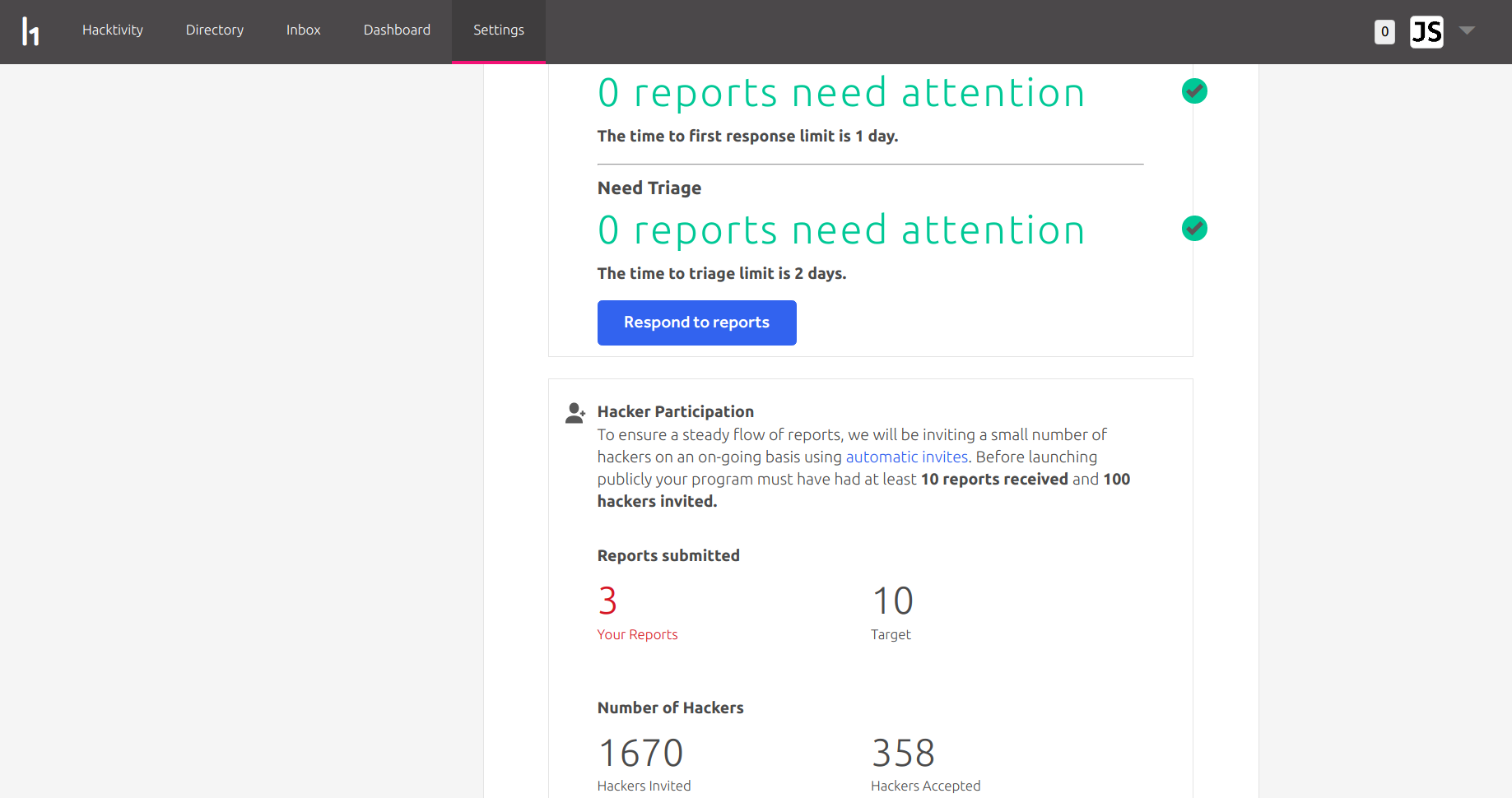 When a program is under controlled launch, its growth is managed by the 'Desired Reports Per Month' value. This value is to help prevent the program from been inundated with reports, and to ensure that the program can sustain good response times.

An additional important step of running a vulnerability disclosure program is to inform any third-parties that may be inadvertently affected by it. It is a good idea to inform your hosting provider, DNS provider and any other third-parties that may be responsible for hosting any of your services. This is to ensure that they are OK with this sort of activity, and also so that they understand what is going on if your account suddenly has a spike in suspicious incoming traffic, etc.

If a third-party provider does not like the idea of you running a vulnerability disclosure program, I think that you should be looking elsewhere, as this potentially demonstrates that they do not proactively follow modern security best-practises.

On 14th April 2018, I received approval from HackerOne for my program to be launched publicly. 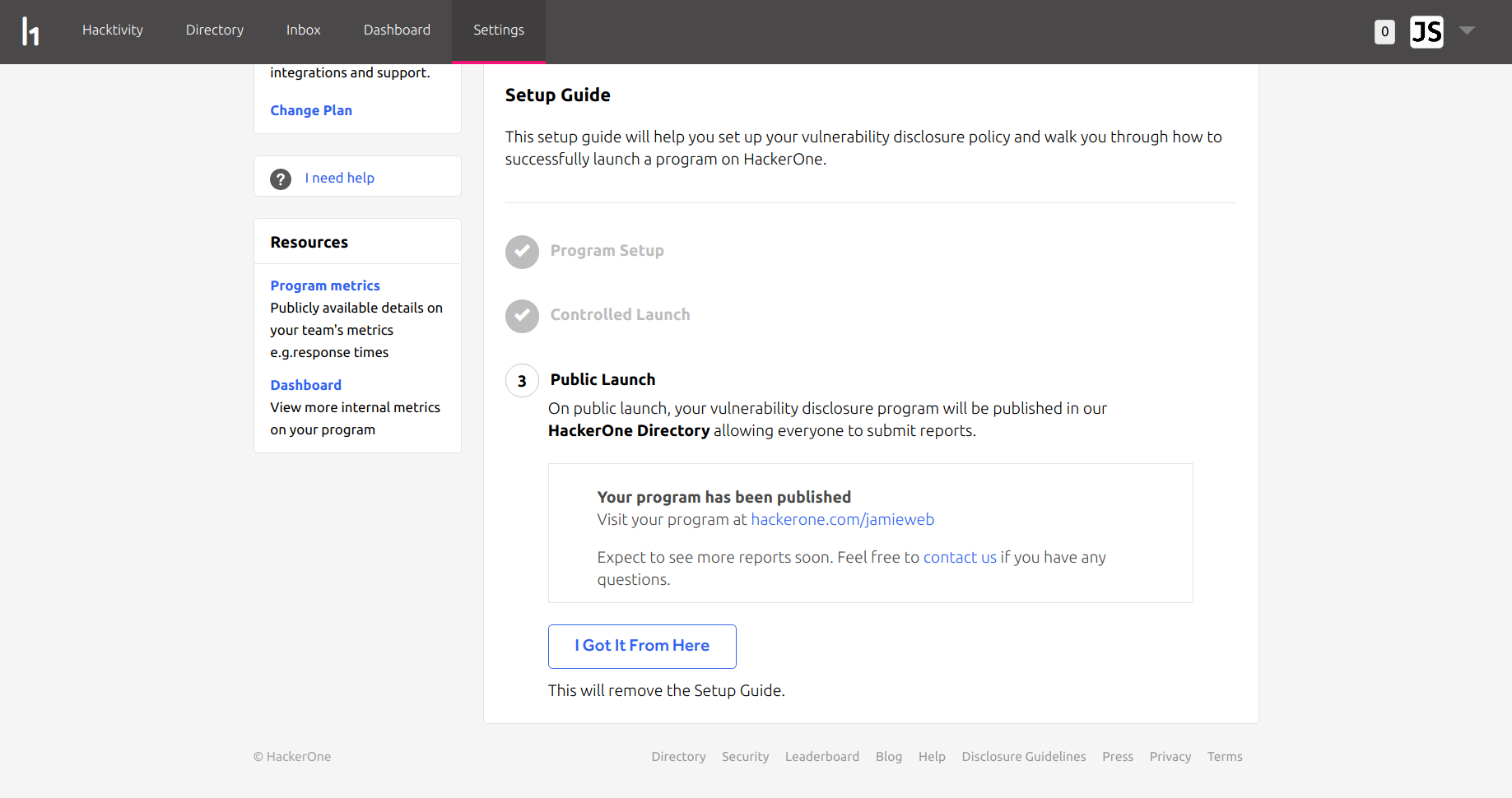 The public launch means that my program page is now publicly accessible, and hackers do not have to be invited in order to submit bugs. My program is now also listed on the HackerOne directory, which makes it easy for hackers to find organisations to work with: 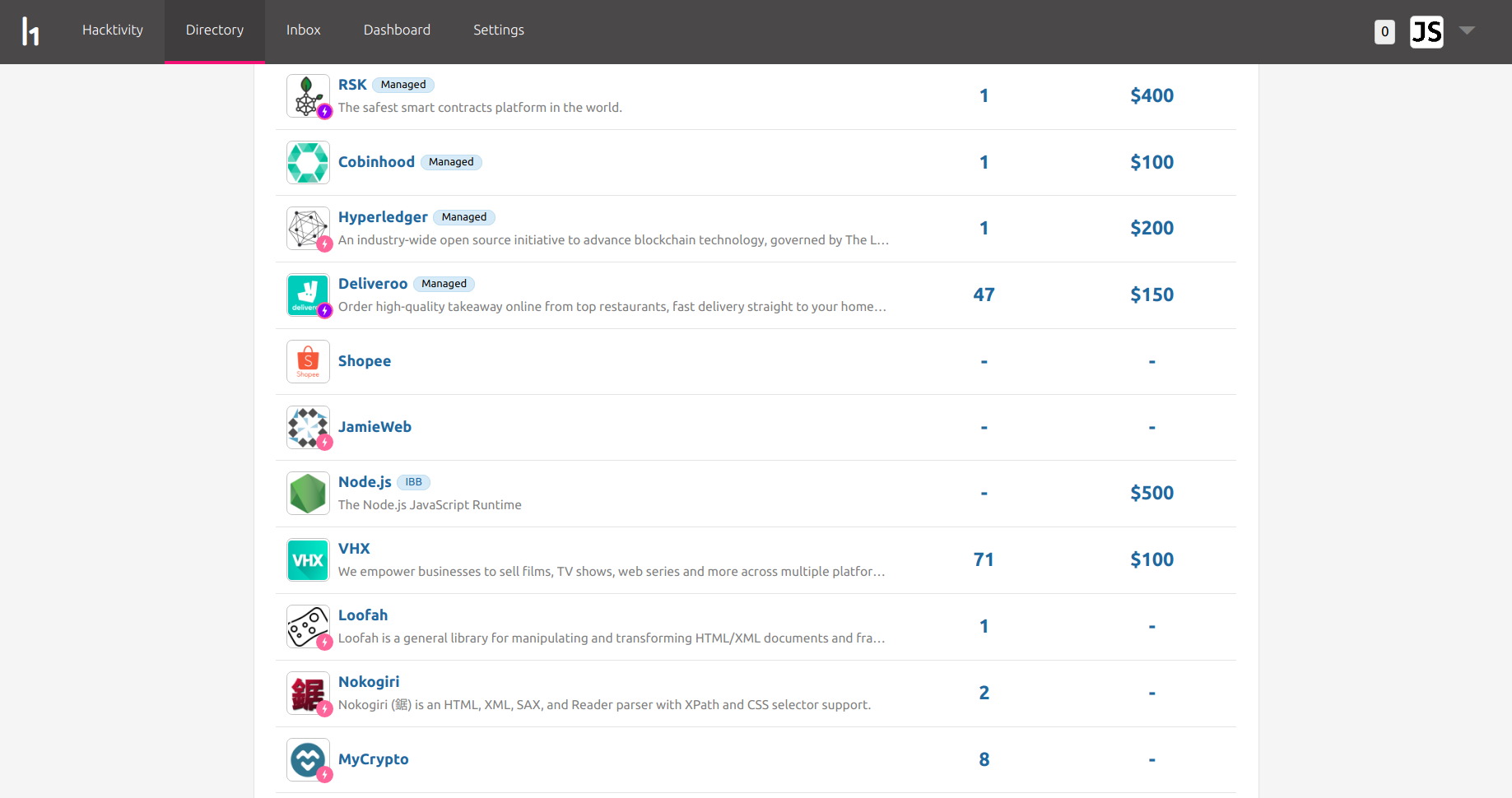 The weekend of the public launch was particularly busy. My server was hit with many more vulnerability scans, exploit attempts and general traffic than normal which was great to see, and several minor bugs were discovered.

As of writing this, I have received 14 unique reports to my program. Out of these, 8 were valid and are now resolved, and 6 were 'Informative'.

The 6 'Informative' reports were most likely automated scan results providing false positives, or less-experienced hackers that didn't understand that something was intended rather than a vulnerability. I don't believe that any of these were 'spam' attempts.

Below are some details on a few of the reports that I have received so far:

The first valid report that I received was from retr0, who raised the issue of having TLS 1.0 and TLS 1.1 enabled on my site.

While there isn't currently a direct risk of using these as long as you are using the latest server and client side implementations, they are older protocols and it is good hygiene to disable them.

Before doing this, I assessed the potential compatibility impact by logging the TLS protocol versions in use using an Apache CustomLog:

I actually wrote an entire blog post about this at the time, please see it here.

Again I'd like to send a big thanks to retr0 for their useful researching and great communication!

The second valid report that I received was also from retr0, who identified that the Cloudflare __cfduid cookie did not have the 'Secure' flag.

At the time, I was testing out the Cloudflare reverse-proxy and caching service, which involves the Cloudflare edge nodes making various modifications to your HTTP traffic, including setting the __cfduid cookie. This cookie is used in order to remember when a user has passed a Cloudflare security challenge - so that they are not immediately challenged again on their next request.

I had set the Cloudflare security options to 'Essentially Off', as they didn't offer a significant benefit to a site like mine, with purely lightweight and static content, and where the origin server IP addresses are not intended to be hidden. However, Cloudflare still unfortunately sets the __cfduid cookie and it doesn't seem to be possible to disable it unless you have an enterprise plan. Even though this is kind of harmless in the real world, I really dislike the idea of having a cookie set upon visiting my website in the first place, nevermind one without the 'Secure' flag - to a user who is not aware of what the __cfduid cookie is for, it may just look like a tracking cookie (which I would never use on my site). Cloudflare state that the cookie does not contain any confidential information so its lack of the 'Secure' flag is not significant. While this is true, it just doesn't feel right to me.

Thanks again to retr0 for raising this!

This vulnerability was particularly interesting... abdelkader reported to me that the 404 pages on some areas of my site were vulnerable to a form of content injection:

As you can see in the screenshot above, this is just the standard Apache HTTP 404 'Not Found' error page, and as usual it is echoing back the requested URI that cannot be found.

I had actually set some custom ErrorDocuments in my global Apache configuration file in order to help prevent this 'echo' from happening:

However, due to how my catch-all virtual hosts are set up, these ErrorDocuments were not used in some situations. The catch-all virtual hosts are designed to prevent people accessing my website via the IP addresses directly, or by pointing another domain name at my server. If the Host header or SNI (Server Name Indication) doesn't match any of my virtual hosts, it will fall back to one of the 'catch-all' virtual hosts which shows a 403 Forbidden page with a link to my main site. You can see an example of catch-all by connecting to my: IPv4 address or IPv6 address directly.

Before receiving this report, I had my catch-all virtual hosts configured as follows:

There are two problems with this configuration:

The solution that I decided on was to continue using the Location directive, but to specify ErrorDocuments specifically for the catch-all virtual hosts:

Since these are defined directly within the virtual host configuration, there will be no access issues or edge-cases where they cannot be served.

The impact of 404 page content injection is that an attacker could potentially use this in order to construct a phishing 'page' that would be served by my web server. Designing a phishing page like this would be quite difficult, since it would only be possible to use one continuous line of plain text. However, with some careful text padding, line breaks and perhaps ASCII art, it could be possible to create a somewhat usable phishing page. I plan to investigate this further and see what the limits of this vulnerability are.

Thanks again to abdelkader for reporting this vulnerability - it was a particularly interesting one!

Overall I am absolutely delighted with my HackerOne program. It's great to interact with the hackers and see the different techniques that they each use in order to identify problems, as well as the creativity of some of the vulnerabilities that they find.

I think that working directly with hackers is a crucial part of maintaining robust security. Now that I've run my HackerOne program for a few weeks, it has definitely re-enforced the fact that it's not feasible to create and maintain a hardened application without involving hackers - and I don't just mean planned, formal penetration-tests, I mean letting hackers from all over the world conduct continuous testing on your production environment.

I have also updated my security.txt file to include details of my HackerOne program:

Finally, I would like to send a big thanks to Shay, Chris and George as well as the rest of the team at HackerOne for their amazing support throughout this process!